AIIMS and Safdarjung hospital in Delhi warned striking doctors a strict punitive and disciplinary action against them for their suspension/termination of services, vacation of hostel accommodation, if they do not resume their duties with immediate effect. 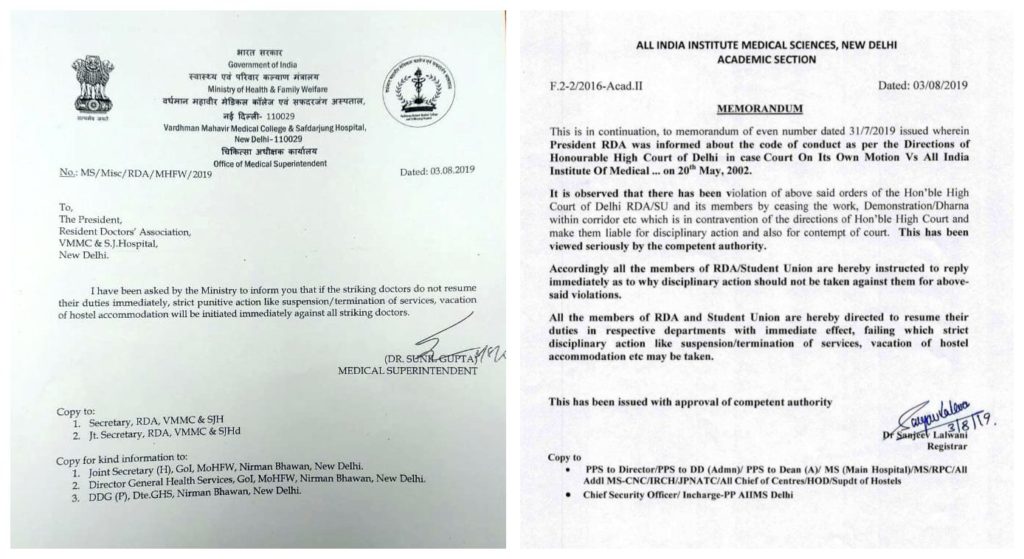 Copy Of Notices Issued To The Striking Doctors

Agitating doctors blocked the traffic in the vicinity of AIIMS and Safdarjung hospital on Saturday morning. They are in continuation of strike against the National Medical Commission bill (2019), however, emergency services were resumed on Saturday.

NMC bill was tabled and passed on 1st August, 2019 in Rajya Sabha. Many doctors were detained by the Delhi Police on last Thursday while they were marching towards Parliament.

Dr. Harsh Vardhan called the NMC bill the biggest reform of medical education in his opening remark of Parliament debate. He also said that MCI’s role had been questionable in the past and charges of corruption were levelled against MCI. NMC bill will replace the existing body of MCI.

Read also: Why Doctors Are Against NMC Bill?

Doctors are disappointed by some provisions in NMC bill. They also raised questions against the ambiguity of the contents in the said bill.