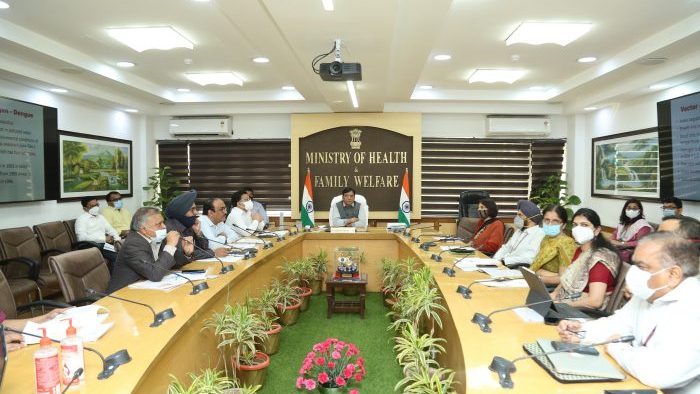 Union Health Minister, Dr. Mansukh Mandaviya reviewed Dengue situation in Delhi having a high-level meeting today with the UT of Delhi to assess the public health measures taken for control and management of Dengue.

Highlighting the urgency of intervention, the Union Health Minister pointed out that many poor people are affected by dengue who are weakened due to low platelet count. “Primary health care centers may prescribe anti-pyretic drugs to suppress the symptoms without addressing the root cause which may lead to eventual demise of the patient. Since testing is the most important step to identify dengue, these deaths will not be reported as such and the incidence will continue to be under-reported.” He thereafter directed officials to ramp up testing so that all cases are reported and treated properly.

The Minister also stressed on the need for effective coordination between Center and States. He observed that some hospitals are over-burdened with dengue cases while beds continue to be empty in other hospitals. Effective communication between all stakeholders was thus suggested as the way forward.

He requested the Delhi officials to look into the possibility of repurposing COVID beds to treat Dengue. It was decided that health officials of the Union Health Ministry will support their counterparts in the Government of NCT of Delhi to chalk out a detailed action plan to combat Dengue.

Dr. Mandaviya also advised to on-board all the MCDs, NDMC, Cantonment Board and other stakeholders in the effort to intensify vector control. It was noted that although the Health Administration was very effective in their communication on vector control, the efficacy of these messages on the action taken by common people remains unknown. Use of mosquito nets, full sleeved clothing, indoor fogging is to be encouraged while the MCDs are to spray in the houses of the Dengue patients and 60 houses around it.

Other than removing stagnant water in houses, restaurants, industries, overhead tanks, the Health Minister stressed on the identification of slums without regular supply of water where water is stored for consumption. Although extensive cleaning is required in some surfaces where water gets replaced frequently like coolers and refrigerator trays, the use of chemicals like Temephos granules is known to be effective in larvae control.

Dr. Mansukh Mandaviya was apprised that campaign of the Delhi Government to sensitize school children on larvae control and training them to ensure lack of water storage in flower pots, feeding bowls for birds, coolers etc., will be taken up as the schools are being reopened.

Biological larvicide fishes like Gambusia have been deployed in 163 sites. The Govt. of Delhi has declared Dengue a notified disease which will enhance reporting and monitoring of the disease. Delhi is monitoring all fever cases, suspected dengue cases and confirmed cases. All hospitals have been converted to sites with zero tolerance of Mosquitoes; since vectors acquire the pathogen from infected persons and are able to transmit it in their offspring too. Mosquito net will be provided to Dengue patients.

Although only 10% cases are complicated and mortality seldom crosses 1%, all Delhi Govt health officials assured the Union Health Minister that the outbreak shall be contained with the help of all stakeholders. Members in the meeting also discussed about the new vaccines development to target Dengue.

The Union Health Minister directed the Union Health Secretary to identify and send team of experts to States with High Active Caseload of Dengue. The Best Practices of these States are also to be recorded in the subsequent review meets.

Tags:
Previous Article
Docs At Fortis Saved A Man’s Heart Which Got Ruptured by Metallic Stent Inserted in The Liver
Next Article
WHO Kicks off A Decade of Action For Road Safety To Prevent At Least 50% of Traffic Death