Diabetes Can Cause Poor Mental Health Condition In Elderly People 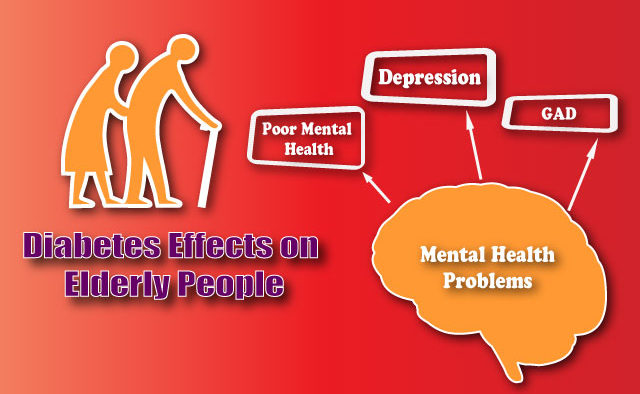 Doctors have revealed that aging people suffering with diabetes are more vulnerable for having mental health problems like depression, Generalized Anxiety Disorder (GAD) and cognitive impairment.

Aim of the study was to know the impact on Quality Of Life (QOL) on elderly population diagnosed with diabetes. This was compared to non-diabetic patients.

For this, a cross sectional comparative study was performed in geriatric medicine Outpatient Department (OPD) of AIIMS from November 2014 to June 2016.

In this study, a total of 94.4 percent diabetic patients were receiving some form of anti-diabetic medications and 14.4 percent were on insulin.

Dr Rishav Bansal at department of geriatric medicine at AIIMS said, “If an elderly patient is diagnosed with diabetes, he has to take medicines every day. This increases the risk of mental health sickness due to prolonged medication.”

“ When we conducted the study, we found that older patients suffering with diabetes are more depressed, have anxiety disorder and cognitive problems unlike the other group of patients who were non- diabetic,” he said.

“Aging is a well-known risk factor for common mental health disorders all over the world. In this study, we noted that 35.6 percent diabetic patients were in depression. And only 16.7 percent non-diabetic patients were found depressed. Similarly, GAD was found in 12.8 percent of diabetic patient as compared to non diabetic which was 4.4 percent. The health system in India needs to work on providing better care for older diabetic patients who suffer with lot of chronic diseases,” said Dr Prasun Chatterjee, professor of geriatric department at AIIMS.

Cognitive impairment in diabetic cases was 53.9 percent while in non-diabetic it was 27.2 percent. Study found that the most common comorbidity in diabetes is hypertension 64.4percent. The findings are published in the Journal of Geriatric Mental Health

“Diabetes in old age is associated with increased risk of mental health disorders and an accompanying poor quality of life. Patients with diabetes require access to mental health support in addition to management of metabolic abnormalities,” said Dr Nand Kumar, professor of psychiatric department at AIIMS.