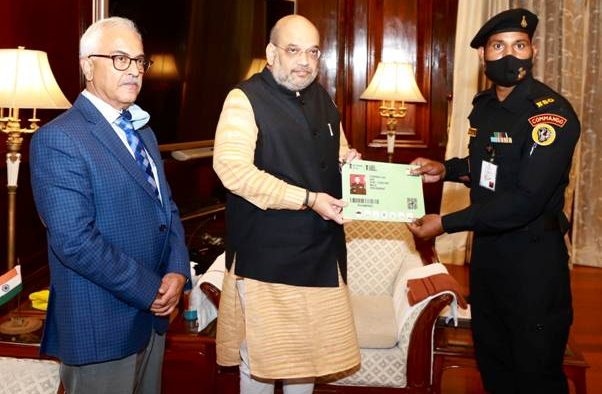 On the auspicious occasion of ‘Dhanvantri Pooja’ today, which is celebrated in the honor of ‘The God of Medicine’, the process of distribution of health cards across CAPFs has begun. From today onwards, health cards distribution will be undertaken in all CAPFs and the number of cards distributed will be displayed on the website of Ministry of Home Affairs (MHA) on a daily basis. The distribution of about 35 Lakh cards will be completed by December, 2021.

Union Home Minister Shri Amit Shah had launched ‘Ayushmaan CAPF’ Scheme on Pilot basis in the State of Assam on 23rd January, 2021 to provide healthcare services to all Central Armed Police Force (CAPFs) personnel and their dependents. The Scheme is a joint initiative of Ministry of Home Affairs (MHA) and Ministry of Health and Family Welfare (MoHFW) and National Health Authority (NHA).

Shri Amit Shah mentioned that the Prime Minister, Shri Narendra Modi has always given paramount importance to the interests of the security forces of the country, and has taken many steps for their welfare. Union Home Minister further expressed that the CAPFs should take care of security of the country without any worries, Modi Government will take care of their families.

As a part of pan-India roll out of the Scheme, health cards will be distributed to more than 35 lakh beneficiaries across various CAPFs which include serving force personnel and their family members.

The pan-India roll out of Ayushmaan Scheme for CAPFs will provide seamless access to healthcare services to all serving CAPF personnel and their dependents anywhere in the country at all AB PM-JAY and CGHS empaneled hospitals.

To enable seamless services to CAPF beneficiaries, NHA has created appropriate mechanisms with a dedicated toll-free helpline 14588, an online grievance management system, and a stringent fraud and abuse detection, prevention and control system.