Regulation of Acupuncture In India 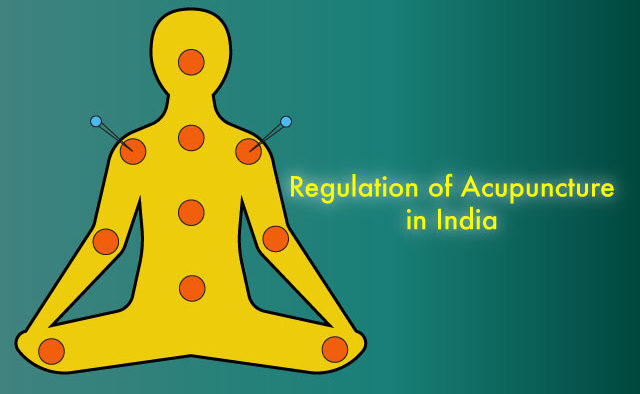 Soon, there would be slew of guidelines for practicing ‘Acupuncture’. Union Health Ministry has recognized ‘Acupuncture’ as a system of healthcare therapy. The Central government has planned to draft regulation and promotion for acupuncture in India.

Acupuncture is a form of treatment that involves inserting very thin needles through a person’s skin at specific points on the body to various depths. Research suggests that it can help relieving the pain.

Why To Regulate Acupuncture?

Central/State governments were directed to regulate the various “unrecognised” streams of alternative medicines. Acupuncture was accepted as a mode of Therapy vide Ministry of Health and Family Welfare on 25th November, 2003.

In 2016, the ministry formed an Inter-Departmental Committee (IDC) for identifying viable new systems of medicines.

Thereafter, certain proposals were received in Inter-Departmental Committee (IDC)  for recognition of Acupuncture.

The proposals were examined by IDC. And report  based on such examination was submitted in 2018.

“There must be an Experts committee for this purpose. Which needs to include experts who are academically active in acupuncture. This can be determined from publications on the subject in reputed database like pubmed. Experts from Allopathy and other systems also need to be members of such committees for drawing the boundaries for evidence based practices, for ensuring complementarity and best interests of patients,” stated health ministry’s order.

“We have been directed to frame detailed guidelines for promotion and regulation of acupuncture as a system of healthcare therapy in India. In early April, we are going to have our first meeting and then we will submit our report to the ministry,” said Dr VM Katoch, chairman of the Apex Committee on Acupuncture adding that the new guidelines would be applicable to all the acupuncture practitioners.